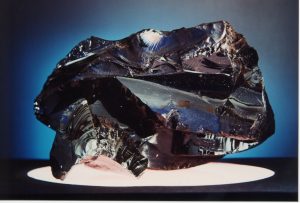 Gilsonite, or North American Asphaltum is a natural, resinous hydrocarbon found in the Uintah Basin in northeastern Utah. This natural asphalt is similar to a hard petroleum asphalt and is often called a natural asphalt, asphaltite, uintaite, or asphaltum. Gilsonite is soluble in aromatic and aliphatic solvents, as well as petroleum asphalt. Due to its unique compatibility, gilsonite is frequently used to harden softer petroleum products. Gilsonite in mass is a shiny, black substance similar in appearance to the mineral obsidian. It is brittle and can be easily crushed into a dark brown powder.

Gilsonite is found below the earth's surface in vertical veins or seams that are generally between two and six feet in width, but can be as wide as 28 feet. The veins are nearly parallel to each other and are oriented in a northwest to southeast direction. They extend many miles in length and as deep as 1500 feet. The vein will show up on the surface as a thin outcropping and gradually widen as it goes deeper. Due to the narrow mining face, Gilsonite is mined by hand today, much like it was 50 or 100 years ago. The primary difference is that modern miners use pneumatic chipping hammers and mechanical hoists.

The mineral now know as Gilsonite or North American Asphaltum was discovered in the early 1860's, but it was not until the mid-1880's that Samuel H. Gilson began to promote it as a waterproof coating for wooden pilings, as an insulation for wire cable, and as a unique varnish. Gilson's promotion of the ore was so successful that, in 1888, he and a partner formed the first company to mine and market gilsonite on a commercial scale.

Time and technology have changed this classification system. Processing of Gilsonite now removes most of the inert contaminants and newer, more powerful, solvents make the higher softening point grades more interesting to the user. Today, Gilsonite is graded by softening point (a rough measure of solubility) and particle size. All grades carry a degree of quality far superior to those first small amounts of crude Gilsonite marketed in the 1880's.

The information in these pages is based on laboratory evaluation and field experience. It is correct to the best of our knowledge. Since use and application of our products are beyond our control, Ziegler Chemical & Mineral Corp. cannot be responsible for obtained results whether used alone or in combination with other products. Recommendations are made without warranty or guarantee and buyer assumes all risk and liability.

How is Gilsonite packaged?

Gilsonite Compatibility with other products

Skip back to main navigation